I wrote last year about how I finally joined the Democratic Party and exited a lifetime of being a self-declared (and practicing) independent. This was a work in progress – a year ago, I wasn’t ready to make this kind of commitment, but a few months later, I was ready. Although I still value tremendously the local options to work across the aisle (they seem fewer and further between in Washington), I’ve generally thrown my voice in with those who are focused on being “all in” for whomever wins the nomination.

More of this and less bickering, please. Because this? Kind of melts my heart. Source: Whitehouse.gov

To be fair, primaries have traditionally been hard for me. I didn’t really have a strongly held opinion even by the early summer of the year Mr. Obama was first elected, although when I saw the elderly ladies in Chicago waiting for the bus with Obama tees over their dresses, I kind of fell in love with that. In fact, again, this time, I did enjoy getting to learn the positive side of how Ms. Clinton and Mr. Sanders make people excited about our country, and I think probably in the end I am more swayed in my ultimate decision by how the candidates move the Americans all around me and stir them to make this a better country, than the relatively fine points of the differences between the two of them in policies or views. 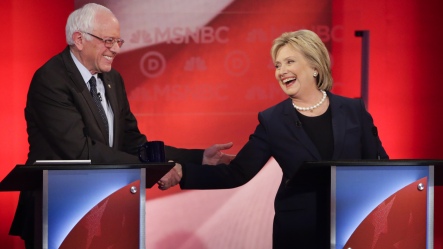 For a while, there was some really wonderful role modeling going on, here. (Source: NPR)

For a while, I likewise enjoyed the debate process, because it showed that Democrats can be civil and fierce at the same time. It didn’t teach me anything much that I didn’t already know about the candidates, but I liked the conversation the debates engendered, and I learned things from that conversation.

That’s maybe something I’ve learned, very slowly, about myself. I have strongly held opinions on all kinds of things, and I think about all kinds of ideas all the time, and about how to solve all kinds of problems, but the thing I personally value the most is how people feel. A president who can help make Americans feel like heroes and help us get back to acting like heroes is what I want, more than anything. Because I think there’s so much more hero in so many more people than they realize, and leadership is about helping them embrace the truth about themselves. I want to be a heroine, and I want to live in a world full of heroes and heroines.

With respect to the Primary process, though, we’ve gone past the point where we’re doing much of that.

Over the past several weeks, I have simply gotten sick of what is left. I’ve gotten sick of the bickering and the posturing and the attacking. It’s not that I want to keep Democrats poised to attack Republicans … it’s that I think we have an immense amount of work to do — I think there are many ways in which this is a pivotal election, and things could go good, or they could go crazy bad. I’ve gotten to the point where we’re not really building people up anymore, we’re just trying to bully people to get them to endorse “our” candidate. And I’m just not interested in tearing other progressives down.

My vote is in there. I promise, you guys. Please vote. Your voice matters, even if you use it privately.

I have to vote by absentee ballot, which is actually the first time I’ve ever done this, and thank you to my friends at the Michigan Democratic Party for helping me through the process. And I’m not going to talk about who I endorsed in here, although obviously, it wasn’t any of the Republican buffoons. I did something like this once before, when it came to using my own life as an education into HIV prevention, and I ended my article by noting that I got tested, but my results were none of your business.

I love this, every time I see it (and I get to be reminded of it thankfully often). Source: sisterhoodnotcisterhood on Tumblr

Here it goes again. I endorsed one of the two of them. I’m not going to tell you which. The way things are right now, I feel like this is the radicalest thing I can do, and you know I love being radicaler and radicaler (and I still love neologisms).  I’m not making this choice because I’m better than anyone. I get into fights, and I have to make pledges to myself not to pick fights — not in the sisterhood, and not in the Democratic Party. My call to other Democrats: please, please, engage in the rest of the Primary Season, and then really, really engage after that. Be proud, if you’re a strong supporter of either candidate. But just like we must protect our sisters, let’s keep our eyes on making a stronger country, and a stronger Party, and a little less on being right or beating other Democrats.

2 thoughts on “So Done With Primaries Rancor”