This morning, I’m finally watching Monica Lewinsky’s TED talk. I hadn’t had time to watch it yet, but I’m being selfish with a few minutes on a Saturday morning. I think you should watch it, too. Like the best of TED talks, Ms. Lewinsky bravely wraps her personal story around knowledge about how others have been harmed as she was harmed, and insight about how her story is a starting point to changing the world and making it better for all of us. She does, incidentally, just exactly what Teri and I have been trying to do with Our Narratives. And Monica used the opportunity to do this on an explosive, national scale, in that unique way only TED truly allows for.

In 1992, I, myself, fell a bit in love with Mr. Clinton – while I had been used to fighting for environmental action and other causes, I had never stumped for anyone in my life, but a classmate and I spent our volunteer hours stuffing mailboxes and trying to “rock the vote” and get people out to vote for Bill and his, at the time still somewhat zombie-like sidekick. He’s still the only president I’ve ever done something like this for, so I guess in my own way, having never met him, I can sympathize particularly with that element of Monica’s story. I remember, in conservative Holland, going to a downtown restaurant and celebrating the Clinton/Gore victory among the tiny cabal of Democrats. I didn’t (and don’t) identify strongly with the Democratic Party as a whole, but I felt it at that moment*.

By 1998, I was still a budding feminist (I’m just a couple years younger than Monica, and I will turn 40 at the end of April). In the past years, I had spent time as a contributor, editor, and ultimately editor-in-chief of a news journal at the University of Michigan, the Michigan Review. The Review and my time with it is a complex story. At times, it has been a neoconservative hotbed, and I am sometimes loathe to admit any affiliation with that. In my time, it was a dynamic balance between social conservatives and libertarians, who often did not agree or see eye to eye, although we all valued the individual and our talent, creativity, and passion as the basis for change and for progress in the world. That ephemeral balance, in those days, was something magical, and an important part of who I am.

I rode in amongst a wave of other libertarians (although I didn’t even know what a libertarian was at that time, and once, a fellow editor told me to ask a prominent local libertarian what the difference was between a libertarian and a libertine, without educating me on what the question meant… good prank), but I recognized tensions with the social conservatives. Most of the social conservatives I rode in with were respectful people, who tolerated difference even if they did not celebrate it. But not all. Sometimes, I stood up. I remember that there was a particularly obnoxious young man who came to the Review. He became infamous in our time on Michigan’s campus – it’s not that easy to stick out amongst 40,000 people. Once, he wrote an “article” in which he stated that a protestor “smelled like a wet Pakistani.” I led a nixing of this foolishness. Another time, in a staff meeting among many young women, he pitched an idea on how he had just turned 21, and gone to a strip club, and how he wanted to write, again #airquotes, an “article” on which girls would “do stuff” when he stuck dollar bills in their panties. I ran him out of that meeting, as managing editor, and damn proud am I. Other times, I sat silently and uncomfortably, on my hands, as women and women’s rights were mocked in our space, and sometimes, I even stooped to the level of token minority, or pretended to laugh along, in order to hide my inner revulsion. I am sure I was an Uncle Tom at many other times, much as I frequently feel like the Uncle Tom (or Aunt Tomasina, or whatever) of the trans community these days. Occasionally, though, I got it right. I actually found (it’s on page five, here) one of the articles I wrote, of which I am somewhat more proud, and Teri and I re-read it, and … I’m still at least not mortified by it**. 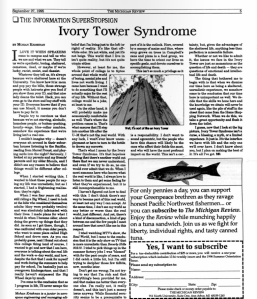 I continue to push myself to feel in the real world in each moment, and not to discount my experiences because they are mine. Now, I recognize how much of this was my internalized and self-directed misogyny, as well, although that was something I did not grasp, then.

But, at that time, although I questioned her treatment, and I usually avoided the vulgar jokes, I didn’t have the tools or the words to express or understand what was so wrong with the way she was treated. I remember also, clearly, from that era, how I had not understood what had really been going on with Anita Hill. Much as I was a libertarian before I understood the term, and this often led to me not being able to articulate my viewpoint effectively or rise appropriately or summon courage consistently when it was needed, I was a feminist before I properly understood the term, and my early implementations of feminism were, honestly, weak. It would be a few years, around 2001, until I became properly versed in feminism, spending a seven-month period of joblessness, superimposed on 9/11, reading Gloria Steinem, Shulamith Firestone, Andrea Dworkin, Kate Millet, Naomi Wolf, and so many others, as well as backing philosophers like Michel Foucault, the rave of feminists “back in the day.” It was at that time, that I went back to Zora Neale Hurston, Toni Morrison, Richard Wright, and even Frederick Douglass (whom I keep quoting), and re-contextualized what I heard***. And it would take the next 15 years, following that, for feminism to work its way through my tissue and cure me, and like vampire poison, sometimes, I still feel that sense of womanhood and sisterhood coursing through me and curing me, yet.

Now, looking back at all this, 20 years later, I recognize the blatant sexism and mistreatment Monica endured. After some feminist or other explained to me why anyone would reference a “pubic hair on a coke can,” and what the comment had meant, and after Toni and Zora explained to me just a little of what it is like to be black woman in America, now, I better understand what happened to Anita Hill, too. By the time Hilary Clinton was in the news for something called “cankles,” I still had to look the term up, to understand what it meant, but I had a fair idea of what was being done to this accomplished and dedicated leader. And like Monica did in her talk, I now recognize the overlapping and intersecting aims of bullying as it is leveled against not just women, but the LGBT community, and everyone who is not rich, white men and their sons (as long as the sons don’t turn out to be poofters).

By now, I can clearly and comfortably say, that Monica should be so proud of this TED talk. And all women should be proud alongside her, as I certainly am. The way she was treated, twenty years ago, was an attack on all women. It had little to do with the ethics of cheating or leadership impropriety – serious issues but just a front for the subtext in that era – and everything to do with the objectification and denigration of women’s bodies and women’s experiences, a celebration of the sexual double standard, an an entrée into the emerging world of cyber slut-shaming, cyber bullying, and all the brave new things technology fused with hatred brought us in the internet era.

I was not equipped to understand that, and speak out ferociously, in 1998. Neither was Monica Lewinsky. But we have grown into fierce middle-aged women, not in spite of ourselves, but because of ourselves. We just had to overpower the messages society sent us about our value, and reinstate our internal notion of our worth.

* Later, the second time I felt moved by a candidate would be in Chicago in 2008, when I saw elderly African American ladies waiting at the bus stop, in church lady dresses, with Obama t-shirts pulled on over the top of them, and I was overcome with this magical sense that these women had never felt like the President of the United States of America could belong to them, and I reveled with them in their delight.

** As it turned out, thus far, I have not “turned to the bottle,” but I have experienced, briefly, unemployment, if not any kind of economic deprivation.

*** I was an engineering student at Michigan, and in those days, at least, engineers had maybe 17 credits altogether to spend on everything other than engineering and “hard” science. I think many of the engineers found “blow off” classes to knock out these requirements. I exempted from freshman English, which is hard even for the liberal arts students and nearly unheard of for an engineering student, but I was also the only one I knew who did her liberal arts sequence in English literature. African American literature was probably my favoritest class at Michigan, even better than quantum mechanics (which I also loved). Prescient, non?