Self-disclosure is scary, and we’re taught not to do it. Sometimes, that’s the right call – one study I read suggested 85% of physician self-disclosure in care was not helpful to the patient. But it’s important to just talk about the experience of being ill, particularly when other privileges mean I might get taken more seriously than some of my siblings, and particularly when it’s the experience of mental illness. In my case, that experience was with anorexia, which started around 2001 and tailed on and off over the next several years (“pulling myself up by my bootstraps”), followed by progressive, fairly steady recovery after treatment (in Chicago, in 2008-2009).

That 85% statistic – it arises when self-disclosure is really to make me feel better. That’s where self-disclosure goes wrong. I’m not posting this for me. I’m posting it for all of you who will never know what this is like.

This is my MMPI profile. I took the test eleven years ago, in the winter of my first term in psychology graduate school, at the University of Florida, at the age of 29. 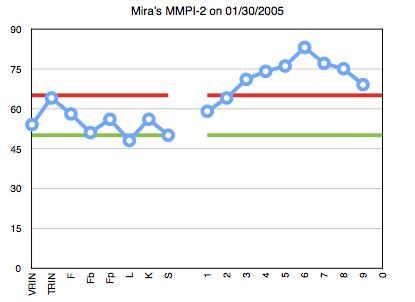 My MMPI-2 taken just over eleven years ago, during my first year in graduate school.

I’m not going to tell you everything about how to read this. The short version of the scales on the left is that I didn’t have a biased responding pattern – I told it like it was. In the past, at many psychology programs, it was actually a requirement (dating back to the intermixing of psychoanalytic blood into psychology) to not only take the MMPI but undergo psychotherapy with a faculty member, and that MMPI would actually be used clinically on the graduate student. There is so much wrong with this that one scarcely knows where to begin. At Florida, we were asked to take it, but we could fill in whatever responses we wanted, and no one saw our MMPIs but us. But in my case, I wanted to see what it said, and I was honest – navigating the thin line between covering over my flaws and making my problems out to be worse than they really were.

The good stuff is the right-hand side. Ignore scale 5. It basically says, “She’s a girl.” That reveal hadn’t been done, yet. For the rest of the ten scales on the right, scores above the red line are called “elevations,” pretty much just like any other elevated lab result. Of the nine scales (ignoring the girl one), six are elevated. That could be interpreted as being pretty bad news. By general practice, this much elevation in an unbiased profile is worrisome.

There’s a lot to the profile. Some have commented that young women seeking psychological help actually have this pattern not uncommonly – in fact, it almost seems like it’s a young-women-figuring-themselves-out scale pattern (at least in our culture and time). Some choice statements about the profile – that I may be trying to change the way the world perceives me (very true, in those days), and that women like me “tend to approach problems with animation, are sensitive, and feel that they are unduly controlled, limited, and mistreated” (okay, yeah, so it’s like you KNOW me… and thank you for the Oxford comma).

So don’t say, “Well, these numbers didn’t represent you.” They did. I was pretty sick at that time, and I was certainly trying to figure myself out and trying to deal with a world that thought I was things I was not. On all sorts of levels. Although I made so many new friends in Gainesville, the loss of stability of living in one state for all my life was significant. My diet was restrictive, and although I was stabilizing, and I made a conscious decision to be ready to be able to take care of patients the next year (no clinical work in year one), I had gotten to a point where I was always hungry, I had lost so much fat that my back hurt sitting in hard chairs for very long at all, and food scared the hell out of me. I would be done with purging – I may even have been by then, but if I had, this was a brand new accomplishment. That bit about becoming paranoid under extreme stress? Yeah… ummm, that happened a couple of times, that year. There were other times, sadly, and this is kind of a statement about graduate school, that my paranoia was not paranoia at all, but well-founded and cross-validated fear – and since I know this facet of how I work, I am sometimes overly conservative in admitting that I am not being paranoid and that, rather, my fears are justified and my persecution is real.

I pulled up a 2008 study of women who had midlife eating disorders. My profile wasn’t totally standard – in particular, somatic distress was much higher in most of them, whereas it wasn’t an issue for me, really (I sort of trooper’ed through when my back hurt, for instance). The mean profile , a 2-3 combination, is different than my 6-7 – my highest scales were much more elevated than the mean participant in this study. Other data, though, including anorexic teen girls, was more similar to mine.  Meaning simply, that, together with what I mentioned above, this data was actually pretty consistent with how I was doing that year.

There’s more that I’m not going to bother turning into pictures and putting in this blog. Although there are many changes that were part of the anorexia experience that have been permanent, generally speaking, my mental health has been better, most of my life – consistent with this, that old MMPI is very clear that it is short-term distress that is being captured and not long-term personality problems. 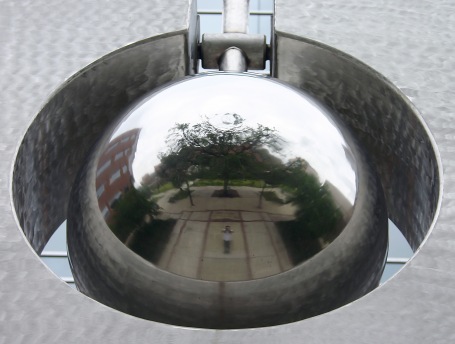 There’s a teeny-tiny self-portrait in there.

In the context of that distress, what did I accomplish in the year (roughly) centered on this data point? Well, having been accepted into a world class graduate program, I moved out of my home state (from Michigan, to Florida) for the first time, ever. I completed the jump from engineering to psychology. I acclimated to graduate school and made significant progress towards my Master’s Thesis, as well as making many new friends and doing well generally in my new program. I read dozens of books (for work and play) and god-knows-how-many journal articles. I wrote a novel (I never liked the ending, so it’s been sort of a shelved project, although I hope to figure out the ending and resurrect it someday). I ran my first (and only) marathon (I’ve since run numerous half marathons and a couple of 25k races, although right now, I just run short distances, for fun). As far as my anorexia went, I stopped purging, permanently, that year. I didn’t gain back to a healthy weight for some time after that, but I stabilized, reversing the course of weight loss over the prior three years and stepping away from the rock bottom and ridiculously unhealthy low weight I had hit the prior summer.

I saved this MMPI profile all this time, and after a number of years (or more particularly, once I was board-certified and there was less potential to use this to discriminate against me), I started jokingly mentioning it in talks I gave. I came across it cleaning up some of my files in storage, and I pulled it out to scan a copy, since it’s something I want to keep. And it occurred to me that it was time to talk about this openly. I recognize it’s truth – that it did, indeed, identify me, but I incorporate all I accomplished that year, because it certainly did not define me in any holistic sense.

No one needs to write a blog about how much someone can do or be or accomplish while they have some physical ailment. It just goes without saying. It doesn’t, for us. And sometimes it isn’t true for us (just like it isn’t always true for them). Sometimes it wasn’t true, for me. But, it’s a single-dimensional lens to look at that MMPI profile and over-infer what the person who holds it could or could not do. You might have gotten her wrong. You might have gotten caught up on what sorry Admissions Committee even let her into graduate school, or point out the obvious, that she’s lucky to be alive (I am, every day). Think of it another way, as a story of the walking wounded. Think of it as a story of resilience. Think of what it portended, that in that time, 11 years ago, she could accomplish all that, for what I can do, now. And along the way, come to celebrate with me, instead of pitying me. For no one ever needed your pity.