This is one of those short posts that started life as a comment on someone else‘s timeline on Facebook. My friend, Tania*, asked for people’s thoughts about the idea of legalized euthanasia, suicide, and/or physician assisted suicide. Her questions follow this article from the NYT last weekend. 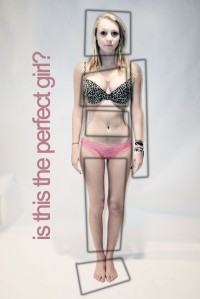 Anorexia is my personal experience, but it’s also relevant to me because there is so much policing around the expression of and fear around the honesty of us as girls or women who are there (and to a lesser extent who were there, and of course, of the men who’ve been there, too) Source: daniellehelm on Flickr

There was one book**, back when my struggle with anorexia was much more active, that was about a young woman who did eventually die (passively) – the young woman made an argument that, in her case, anorexia was terminal. Her argument was based on her experience trying a wide variety of both outpatient and inpatient treatments, and getting progressively sicker. It was a pretty sophisticated argument – it wasn’t a simple brinkmanship kind of argument. The anorexia world is full of these stories of people who drop down to unimaginable weights – like a person who weighed 120-130 lbs dropping all the way down to the sixties – who go on to survive and thrive. Marya Hornbacher is just the most widely celebrated of these stories***. But the young woman… well, actually, it wasn’t her making the argument – if I remember correctly, the book was written by her surviving father, who was telling her story, bravely even including her feelings about the terminality of the illness. Again, if I remember correctly, he didn’t necessarily agree wholeheartedly with what his daughter said, but he had given it deep thought, and he had come to the conclusion that it could not be cursorily written off (as many people are wont to do – for instance just cursorily saying the young woman in the NYT story shouldn’t be “allowed” to “choose” suicide). And, importantly, he recognized that he did not understand the illness like she did, because he had been there as an observer, but the battlefield had been her body.

As survivors (and proud of it!) we know an elemental joy of surviving that you, who have never survived, may not be able to understand. But in having survived, we come face to face also with the knowledge that our survival was not guaranteed, and if we take pride in our survivorship, that pride must recognize the sisters we lost. Source: Rega Photography on Flickr

What’s important about this view is also that she was not saying that all people who are suicidal should end their lives – people who find this to be their solution are not saying, for instance, that no suicide prevention work should be done, or even that our efforts to prevent suicide should not be intensified. Rather, they are merely saying that an expectation of survival of their illness may not be reasonable.

I read this book more than ten years ago, and so it’s taken me a long time to evolve how I think about this. But, what stuck with me for a long time is that, when we talk about diseases and disorders that affect things other than the emotional brain, there are many, many things that don’t have a 100% survival rate. My fiancé had leukemia twice – he survived, and I am thankful, but we accept that a minority will not. For all kinds of leukemias integrated together, the five year survival rate is now just over 60%, meaning we accept that almost four in ten will not make it. Death may not have been a certain outcome in Teri’s case, but neither was life a certainty. If one ignores whether death was “one’s fault,” then the reality is that several mental illnesses – anorexia is one of them – have known rates of mortality. Anorexia is one of them.

When we talk about mental illness, there is not nearly often enough the kind attitude of survivorship mixed with pushing us all to do more, be more clever and resourceful, to help more people survive. My experience, anyways, is that this attitude is very different when talking about a non-mental illness that might take one’s life vs. a mental illness that might take one’s life. Source: A Leukemia and Lymphoma Society Light the Night Cancer Walk, Dave Overcash on Flickr

That basis – the belief that people are responsible for their mental illness – is a deeply problematic one for a variety of reasons. The fact that psychotherapy can help people help themselves feel better really does not validate that idea – all manner of disorders and diseases are amenable to behavioral “treatments,” not just mental illnesses. Schizophrenia is not only significantly more heritable than, say, hypertension (compare this and this), but although both are amenable to behavioral treatments, behavioral treatments (like weight loss, diet, exercise) have higher effect sizes by far for hypertension. Infectious diseases are not given the stigma of mental illness based on one’s having “chosen” the illness, even though they are clearly essentially completely behavioral, whereas almost no mental illness is considered completely behavioral by scientists****.

The result is that, when we think about some other health problem, that has a death rate, we assume those deaths might be preventable, if we get cleverer and come up with new technologies and new medical practices and new ways to help people with prevention. In contrast, when we think about suicide, we assume that those deaths are preventable, and that nothing needs to be done to prevent them except to coerce people to not commit suicide, to call people who commit suicide cowards, to criminalize suicide, etc. To me, that’s deeply problematic, whether or not one believes one should be able to “choose” suicide.

Moreover, it should be deeply problematic to everyone who is trying to reduce / prevent suicide, as well. It pushes suicide into a deep taboo. And it’s hard to treat something that’s taboo. And, of course, it’s deeply problematic for people with mental illness even when suicide is not a part of the conversation.

I believe in it for all of you, too, who have never been there, and so who find it easy to pass judgment. At times, I yearned to be back in your blissfulness of ignorance, although today, I include my experience with anorexia alongside all the many things I am thankful for in my life. It made me the woman I am today. I am glad – daily – to survive, all the more because I know my survival was not guaranteed.

* God, what is it with me, I can’t even get past the italicized intro without a footnote. Just pausing here to say that Tania is such a heroine for the AutismFamily. Her particular passion is autistic (she coins “Aspien”) girls and women, and I love her work so much.

** Comment or message me if you know the book. I think it’s one I borrowed from the Jacksonville Public Library, the summer before grad school in psychology, which was the time of my rock bottom with respect to my own struggle with anorexia / disordered eating.

*** And I’m sure I’ve mentioned before how much of a heroine Marya is, and how amazing it was to, if only for a moment, meet her when she was here to speak.