Celebration of American independence must always have been fraught with complexity and inner turmoil. Our forebears sought a response to the British tyranny of that era, but, having spent all their days as subjects of that crown, they could not have had much knowledge of what life without tyranny might mean*. Our forebears sought to create a “more perfect union,” but they did not create a perfect union, nor have we perfected it with any of the changes we made, in the more than 200 years of our nation. 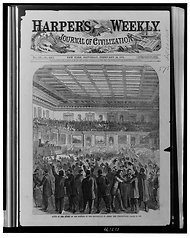 Harper’s Weekly Covering the triumph of the passage of the 13th Amendment. Source: LOC

We have certainly tried. We have tried through giving voting rights to the landless, the abolition of slavery, reconstruction of the South following the Civil War, women’s suffrage, our many attempts to improve our immigration system, affirmative action, hate crime statutes, and other attempts to reduce the harms of racism, the granting of choice to women, our steps to make sure all may access health care, and most recently, marriage equality and other steps to enfranchise the LGBT community. These have all made our land a better and freer land. Sometimes, they were unalloyed good. More often, they were imperfect attempts. 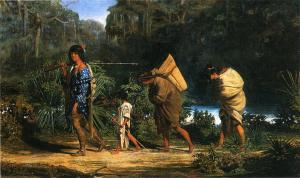 It cannot – must not – be a sign of our patriotism that we pretend that our errors were right or justified, or that we fail to analyze the weaknesses in our values and actions that led us to commit injustice. Source: Wikimedia

Certainly, we have failed, too, and failed not just by doing too little, but failed by refusing to do what was good and just, and by actively pursuing what was and is wrong. Failed in our treatment of Native Americans. Failed, time and time again, in our response to hate crimes, even with all the statutes we’ve put in place. Failed the Tuskegee Airmen. Failed to guarantee equal rights to women. Failed in fighting unjust wars. Failed in our reckless pursuit of the imprisonment of vulnerable populations. Failed in our systemic and reckless increasing of economic disparity. Failed in our inability to lead the world in life expectancy, and not for want of throwing money at the challenge**. Failed in our approach to terrorism. Failed by creating classes of people whose rights we refuse to recognize and pretending that this is good or true.

Interestingly, when this video is shared on Facebook, where I originally saw it, the first minute or so is usually clipped. It’s good, but it’s actually way better with that additional context.

At times and in places, we have led, do lead, and most certainly will be leading the world. At times we have followed. At times we have not only not led or merely followed, but we have ignored the wisdom in proof of better ways embraced by other lands. I was at a wonderful party, last night. A friend mentioned in passing that she had, to her embarrassment, largely ceded the idea of patriotism to extreme conservativism. We talked about how this had come to happen – because I see it in so many people in the Sisterhood, and in other movements of which I am part. How did we come to think that wearing red, white, and blue is patriotic, shooting off loud fireworks is patriotic, but making this country a better place is not patriotic? I ask because so many of the people in my life, these days, are in the nonprofit sector (and in for-profit pursuits) that are actively focused on making the world a better place. I have friends who do this by making sure all Americans can have homes. I have friends who do this by making sure all women can be safe from domestic violence and that all women can have access to healthcare. I have more than a few friends who do this by trying to bring the Autism Revolution. And most of them are cautious about embracing the concept of patriotism.

I quipped that the situation is much like my relationship with organized Christianity, as an openly, proudly, authentically LGBT person. How did it come to be, that if I see a verse from the Bible – even, and often, Jesus proclaiming radical love for all, starting with the self – my mind instantly and rightly goes to fears that this person may be aggressive or even violent? When did Christianity*** become this vessel for hate and this bully pulpit for intolerance, instead of love? This situation is much the same about American patriotism – it is presumed now to be an attitude of haughty tyranny over the rest of the world, secured with our advanced army, our nuclear weapons, our economic might, and now even drones. It is predicated on the idea that we are perfect, that our union is perfect, and that it is our right to rule by force over others. It is, in short, and much as Christianity today is frequently striving to be everything Jesus exhorted against, modern American patriotism is, all too often, everything the dream of our forebears, to live in freedom, to be brave, was not. 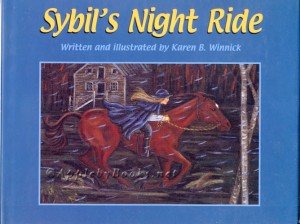 We do not know full well the minds of early American heroes or heroines, like our sister Sybil Ludington, or even our even our sisters like Julia Ward Howe, who left behind a lot more of their thoughts in their words and speeches, but it does rather seem that they did not see bravery as something relegated only to soldiers, but rather, as a fundamental American virtue.

And beyond just recognizing the tremendous injustice of this, how do we take back the night?

Certainly a great claim to patriotism lays at the feet of all the men and women who have fought, shown valor in combat, have risked and sometimes met death on the battlefield. Although I love peace, and I never myself served in this way, I recognize the need for their bravery, and I celebrate it. I do not see a contradiction between my love for peace and my love for our service-members. The two enhance each other. But I also recognize that, alongside these brave souls, countless other Americans are, everyday, fighting to make this country great, and even if they do not risk untimely death, in dedicating their entire lives to this country, they, too, ultimately die in service of it.

In this light, it seems, to me, deeply unpatriotic to me to recognize this day by mere waving of a flag, by engagement in braggadocio, to make idle claims that our country is the best in the world by birthright and as a privilege, and not a country that can be the best in the world because we make it so. In short, it seems deeply unpatriotic to me to recognize this day in any way other than to say that I love this country sufficiently well that I am willing to live and die to make it great, and that I do not merely offer this service as a hypothetical, but I engage in it, every day.

What I am asking you, today, is to consider changing your approach of shying away from the conversation around patriotism. To tell the truth, if you are one of us, in trenches or lofty estates, fighting every day to make this country great, patriotism will do no good to our mighty flag until you are an open and proud patriot. Your patriotism must not mean that you ignore the imperfections in our union, or that you do not fight to make this union more perfect, but rather precisely that you study and learn these imperfections, and you devote your life to righting them as best you know how.

And, although we can, should, must – always – be mindful of the sacrifices so many soldiers and others have made around and before us, so that we could live in the land of the free, we must recognize that living in the home of the brave is not a privilege granted to us by their sacrifice, but a sacrifice demanded of each of us, every day of our lives. In that recognition rises the great hope of this most unlikely of nations that we call home. In that way, declaration of independence becomes not a static event  some 239 years ago but a living call to arms to all of our people. And that is patriotism.

* I argue previously that this conception is much better than the currently widely accepted tradition of interpreting, for instance, Rousseau, as making a claim that freedom is innate and that we know how to be free, instinctually, but get tricked into chains. No, freedom is a technology, and is the most shining innovation humanity has created. There is also great danger in engaging in a presentist attitude that the “founding fathers” (or Jesus, or anybody) would think precisely like I do about freedom, or about anything. However, our forebears – not just Washington and Franklin, but many, many more of them – clearly did conceptualize governance as being a thing in which one actively participated, not a thing done to one. They saw freedom as a thing not just worth believing in, but worth thinking about, meditating on, advocating for, and yes, fighting and risking their lives for.

** We are, embarrassingly, not only not first, but thirty fourth in WHO’s ranking of some 200+ states.