I’d like to try and draw together some thoughts that evolved during dinner with a friend at Philly Trans Health Conference, over the weekend. She and I are two very different, but similarly very happy trans women. This topic of happy trans people is established as one of importance to me. I want to move our happiness from a privilege, from luck, to birthright and expectation for our people*. Much like I want to make a world where people are proud to be autistic, where society recognizes the immense gift it is given in the form of the autism family, I want to make a world where LGBT (and particularly T) people aren’t just safe, but we are truly proud.

Proud as proud can be… and you can click on the flag to buy trans pride stuff from randomflyingpidgeons!

In pursuit of this goal, I made my friend, Kelly, really think during dinner**. I wanted her to evaluate, critically, what it means to be a woman*** – beyond being addressed or seen correctly by others, and certainly beyond wearing a dress or heels, and granting that our identities as women are diverse, beautifully heterogenous, and ever evolving, what did it mean to her that she was a woman? She was a little surprised at how hard it was for her to answer this question.

I asked her a second critical question – not to push her or distress her, but because I think the answer is central to our cause. Why was she happy? And if the first question was hard, the second question was far more difficult.

One piece of extremely worrisome data I want to bring into this conversation is the subset of suicides, particularly of trans youth, that have arisen recently and that explicitly do not seem to look or functional like marginalization, lack of acceptance, or oppression stories. More than a few trans youth have killed themselves in the recent past (like Kyler from San Diego), who had parents who loved, accepted, and celebrated them. Who had solid, if not world-class access to transition-related medical services. Who had schools that celebrated them – one of them was Homecoming King – and who were in at least some cases pretty well-integrated into their communities. Who do not seem to have been experiencing a lot of traumatization by way of bullying or other victimization. I think we need to stop and question why these kids are dead, and how we failed to do anything about it. And we have to recognize that just acceptance – people recognizing one’s gender identity, people supporting one’s name or pronouns, access to school, employment, accommodations – doesn’t seem to always be enough. 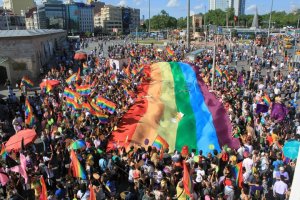 This is Istanbul’s 2011 Pride… the change is global! (Source: Wikimedia)

Moreover, trans acceptance, and LGBT acceptance more broadly, is not a static picture. It has changed dramatically just in the recent history – the stuff that happened since Stonewall – and it is changing at a breathtaking, accelerating rate every day. What is the quality of evidence that acceptance is reducing suicidality in our community?

I want to propose an answer to my own question. I cannot provide an evidence basis for it, but it is consistent with my base of anecdotal evidence. I’ve quickly had the privilege not just to become a happy trans person, but to get to know a lot of happy trans people, in fact many of the most influential ones, and even to share my very life with one. And I’d like to hypothesize based on my experience of them and myself. My hypothesis is that every happy trans person begins their process of authenticity with a sincere, internal step of self-acceptance. I mean real self-acceptance. They enter transition or coming out, knowing and deciding to learn to love, who they are. They do this first, and every subsequent decision in their authenticity process derives directly from this internal conviction – a conviction not just in the truth of their gender identity, but in the goodness and rightness of their gender identity. And, this is really important, they enter into coming out and transition happy. Really happy. Although they may gain confidence, surety, ease, from things like their name or pronouns, or from transition-related medical services, they neither seek nor obtain wholeness from them. They don’t, in fact, need to seek wholeness from anything, for they enter this process with it.

Marya is amazing. So thankful for sisters like this one. Source: Mark Trockman / trockstock.com

In Christianity, there is a rift between evangelistic and liberation theologies, in that the one is interested in finding deferred happiness in heaven, and the other is interested in helping people be well and whole. The rift is old, and deep, not just in Christianity, but far beyond it. The Christ who overturned tables, fed masses, cured the sick, and befriended the harlot, is alongside the apostle, in the same New Testament narrative, who cared less for what is good and what is evil, and cared more for what is right, and what is wrong. Before that, the God that demanded the Israelites strike down their enemies and leave no survivors was the same God that demanded grapes be left on the vine for the poor and the stateless, again, the one a question of rightness and the other a question of goodness. And on it goes back, turtles astride turtles, and we are forever, the serpent and the sons of Adam, at odds, the one striking at the other’s heel, and the other smashing one’s head*****. It plays out far beyond Christianity, and it is deeply enmeshed in the way we live.

And this is where I bring to the trans community not an answer, but the right framework to find that answer. We are failing these fallen siblings of ours, trans youth and trans adults, not just because we haven’t won complete acceptance and inclusion for our kind, but because we have not taught nor empowered each other to find our identities, to take that internal step of self-acceptance that allows for and necessarily precedes the pursuit of authenticity, and in so doing, we do more than just put the cart before the horse. We kill our own kind by selling them a dream that can never succeed.

So how do we stop? How on earth do we not just stop selling this absurdism that transition or coming out experiences, in themselves, can make anybody happy?

My thoughts from dinner that night, over margaritas and excellent Mexican food, link me back now to a video that I helped do for my beloved Actors Theatre, a couple of months ago. In it, I discussed a virtuous cycle between art and life, where life inspires ever greater, more true, more honest art, and art in turns drives us towards our own truths and our own authenticities, making us better people. This is the kind of art that Actors does, and I believe desperately that this is something of which people need far more.

I am far from done in figuring this puzzle out. But my first answer to this question is that we, as visible trans people, must think of our trans visibility, our stories, our narratives, as participating in a similar virtuous cycle with all the life experiences of the trans-gentry******. If we tell stories that are focused on how far we take transition, or how much external acceptance we gain or take, we will instead participate in a vicious cycle, in which we will press our own people ever farther from the thing that could save their lives. So rather, we must tell stories of authenticity, of identity, not because others could ever take on our identities*******, but because, as iron sharpens iron, as life and art lift each other up, our authenticity and identity stories will push our people higher and elevate them in their pursuit of the self-acceptance that presages being a happy trans person.

That’s my theory. I’m all for gathering supporting data, but I’m not going to wait, because this is life and death, and as one of that minority of really, truly, madly, deeply happy trans people, I’ve got to do something. While happiness remains a privilege, like any other privilege, I need to use it not just for me but for making the world a better place.

* Consider this also a shot across the bow of those people (you know who you are) who think that misery is at the heart of trans activism, and who reject any trans person who is happy. I view happiness like I view footnotes. I put it out there until you quite consider it over the top, and then I put it out there some more. The next shot will be between the eyes, my darlings, for I am out to get your worldview.

** I also made her change our plans and go to a place where I could get reservations, because you know, that process of walking around until you find a place to eat is what leads the world to eat at TGIFridays, and life is far too short. And excellent Mexican food came with Mexican revolution – there was a handwritten sign propped in the glass above the door calling for social justice in Mexico. Thank you for that, my darling Kelly.

*** Make no mistake… this ownership of what makes a woman is the principle bullet of exclusionary feminism movements. Although I respectfully agree with these women that women are a wonderfully diverse people who defy simple definition, and the seat of our definition is not in our cleavage, our hips, our dresses or makeup or any of those kinds of things, I continue to strongly reject their claim that only the cisgender early female life experience can be a gateway to womanhood, or that women of all kinds cannot coexist and build each other up and empower each other.

**** In fairness, none of us have any idea what an apple sandwich is, and if I had reached a greater place of sureness in myself when I got to meet Marya, I would have not just thanked her for what she did for me, which was a lot, but I would have pressed for an answer on this important question.

***** I’m with the serpent, and Ruth, and Mary Magdalene, and Jesus, and all of those seeking good over evil and not right over wrong, but you knew that.

****** A very cute term I am now borrowing from Kinky Boots.

******* The boom boom I have, that all the boys chase, and all the right junk I have, in all the right places, belongs to me and no one else. Just as I can never be any better than lousy at being someone I’m not, none of you will ever be a better me than I will.

One thought on “Authenticity as the Sine Qua Non of the Trans Success Story, and the Virtuous Cycle of Narratives Informing Lives”