Yes, you heard me rightly.

I think this needs saying. There are two historical meanings of the term radical in the context of radical feminism. Actually, Merriam-Webster lists three, although their first and second definitions are closely related (I’ll ignore definition four, or at least leave it to the Teenage Mutant Ninja Turtles).

The classical meaning of the term, and the first two entries in Merriam-Webster, goes back to the etymology. A radical approach is one that goes back to the very roots or origin of something. The other, of course, increasingly in vogue in the last twenty years, is the use of radical as a synonym for extremist. Although I don’t personally know any feminists who really hate men (I know many who hate things men do), and I don’t know any people who are really feminist separatists, who want to live off in some female-assigned-at-birth fantasy land (although there is such a fantasy land near here),

There are radical feminisms of both kinds. I want to dedicate this post to pointing out that the former is the more important use of the term, and that the idea of feminism being radical is so important, that we must absolutely not cede the concept of radical feminism to the makers of exclusionary movements, and we must continue to stand up as radical feminists, to own this term, to love it, and to make (by the former definition) feminism that is far more, not less, radical.

To be sure, when second wave feminists began calling themselves radical (1967 is commonly cited for the inception of the term), they existed over a broad range. Some of them were shockingly (for the time) open about how they found men beautiful and appealing. Others argued that patriarchy prevented even the possibility of an ethical sexual relationship between women and men, and that notions like romantic and sexual orientations must be entirely revamped to provide any possibility of ethical comity. (This is most commonly attributed to MacKinnon, and sometimes to Dworkin, but as snopes.com points out, neither said anything like “all sex is rape,” and both were really, to me, insightful in analyzing the ethics of sexuality, particularly heterosexuality). To be fair, a few of them were openly suspicious of not just men, but of anyone assigned male at birth. Germaine Greer went farther than most, and in those days, was openly cruel to transgender people, and particularly trans women; she still has not really set the record straight, although recently her position has been more complex (and more confusing to some, although to me, having already said I think we should cut back on using the term transphobia, somewhat open to discussion). But again, others felt strongly and articulated clearly that feminism had a role in making the world not only better for cis women, but for everyone (Steinem and Firestone, notably — I think a careful read of Steinem’s work over the course of her life makes it hard to believe she was ever much of an exclusionist, but she has been far more explicit about this recently). Finally, still others seemed to vacillate (my reading of Naomi Wolf is this way). There was even room for some philosophies that tread a surreal line between comical and profound (if you haven’t read Vamps & Tramps or other early Paglia … it’s an experience, for sure).

But, this variation in feminist voices needs to be understood in the context of re-analyzing the world that made patriarchy from the roots in an honestly radical way, to figure out how to end the patriarchy. Moreover, while all these struggles for equality are the same struggle, I do feel we should not spend the bulk of our time making a villain of someone for fighting a different part of the equality struggle than the one that affects us at a given moment.

In careful reading of some of the authors I mention above, it is clear that, many times, their intent was to provoke theoretically, rather than demonize a group of people. Other times, I believe they were acting legitimately from fear, ignorance, or uncertainty, and from the memories of their own suffering (“hurt people hurt people“). But these women were spelunkers, lamps bound to their foreheads, crawling through the crevices and tunnels underpinning patriarchal society, having no idea what they might find or what it might mean. In the history of any new science or philosophy, as its principles are elucidated, their implications are not immediately understood, and claims that, in hindsight, seem erroneous or incompatible with the theory are made, being rejected later as the process continues. That is, the vagary of these early radical feminist views, to me, is just like the vagary of the early moments of new theories in physical science, new principles in software design, or other area of the design of science and technology. 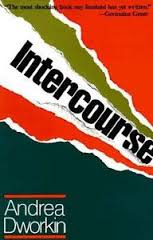 At times, I was/am scared of Andrea Dworkin. I may be the only trans woman you’ll ever hear say this, but I was also strongly influenced by her way of thinking and her way of relating to the world, even if I disagree with some of her conclusions

Before I was aware of the latter use of the term radical, I used to call what evolved next, as the second wave slowed down, as a sort of “land grab” feminism (it has also been called cultural feminism and sometimes “difference” feminism falls into this space, too, when it is not called radical feminism in usurpment of the prior radical feminism). At the time, I didn’t know to articulate that the problem for me most centrally was that my own experience as a woman-in-becoming was being excluded. Nor did I really understand that, to the extent that I have any business talking about the concerns of or advocating for the needs of men, I was doing it as an outsider (because, in those days, I although my heart knew it, I, again, did not have the words to articulate that I was not, had never been a man). But what bothered me is that the feminism that succeeded radical feminism and ultimately stole its birthright was pragmatic in scary ways – willing to sacrifice ideology not just when no alternative was present, but at the drop of a hat, and willing to accept any intellectually odious approach or position if it benefited even one woman, even when it came at the cost of another woman (this cold be benefiting cis women at the cost of trans women, but most commonly, in the US, it was benefiting white women at the cost of black and Latino women).

If there is a reason feminism is associated with monstrosity (outside of the primary reason, which is that it is a tool the patriarchy and the status quo use to stop us), it’s this dishonesty, this unwillingness to follow guiding principles like creating a more just society. Smashing the patriarchy, in contrast, is not monstrosity at all

My feeling is that the results have been disastrous. We did not pass the ERA, because of stupid things, like believing that sex segregated bathrooms were more important to preserve and enshrine than the equality of women and men. (For those of you who are feminists and physical scientists, what this reminds me most of is the Einstein-Podolsky-Rosen paradox…. sadly, nearly 40 years later, the horror of the bathroom is again being used to dehumanize trans people) Feminism became irrelevant to modern life, and we spent the intervening years in stupid arguments that ranged intellectually all the way from “is Ally McBeal a feminist?” to “Is Miley Cyrus a feminist?” instead of talking about how we empower women and build a world where our stories as women matter, get told, are heard.

Behind the scenes, on the other hand, a slightly more complex story was evolving than this “woe for the death of feminism.” Shulamith Firestone, that genius who wrote one text decades ago and largely disappeared from public conversation, I believe, understood many of the intersectional aspects of feminism from her place as a middle-class, white, cis woman. Over the coming decades, bell hooks went far farther, and alongside other women, extended this story to integrate the narratives of the poor and oppressed ethnic minorities, long blind spots of feminism, and later yet, inclusionary queer theorists extended this story to sexual and gender minorities, but largely extending the same story told by Firestone and Steinem that the true feminism was the one that took everyone’s right to personhood seriously. In my mind, as these dies coalesced into the so-called “fourth wave” (which really became an extension of the best of the second wave), the long dark night without a relevant feminism finally broke, and dawn shone, and didn’t it feel good to be alive and to be woman?

So, in the newest lexicon, I endorse the intersectionalism of bell hooks and others, and the trans-feminism of Julia Serano and others. In spirit, I find kinship with most of the people who call themselves part of the “fourth wave” of feminism, as well as most of those placed in the fourth wave by others’ attributions. I endorse these types of feminism as the most radical feminism available to me. I will do my small part (if our gifts were measured by capitalization, bell hooks would be in all caps and I would be in lower case subscript!) to extend it, and to make it more radical yet, and most likely, because we’re nowhere near done figuring this out, there will be other terms for the most radical, and most honest kind of feminism that comes to exist, and when I see it, I’ll join it. I bet Steinem and hooks will too, and if she were here to do so, so would Firestone.

9 thoughts on “I Am A Radical Feminist (And Proud of It!)”