Mostly because it seemed like it’d make a good story. By way of background, when I started transition, I started seeing a therapist and going to a support group (through the fabulous Network) right away, but I didn’t really push for booking an endocrinology consult right away. There is someone decent here in town, but it turned out that I wouldn’t be able to see him until October. Also, he practices out of a diabetes group and trans health is not his primary calling. So, I did some digging and some emailing, and I settled on my second course of action, to seek care instead at the University of Michigan, which had the advantage of offering a comprehensive program. I don’t think speech therapy is my most pressing problem, but I’m going to get a consult from their SLP when I go back for my next appointment. Likewise I’m not sure it’s the surgical clinic I want, but still.

When I started support group, in hindsight somewhat foolishly, I didn’t know if I should come “en femme” the first time. I think, the second time, I wore foundation (and erm, a bra under my short trench) and went out for a drink like that after. One of the bartenders at the place we usually go to said to me, aside, when I was looking up front for someone, that he didn’t know who was what gender, but we were some of his nicest customers. After that I went to group in fairly clearly female form, and honestly, my “look” has only subtly evolved since then. Anyway, it seems in hindsight ridiculous for me to question whether it would be okay to go to a transgender support group in makeup. Mira won the same argument some four or five months later, when I had my endocrinology appointment, and I went in booties, a grey tweed skirt, white blouse, black velvet jacket (❤️ I do rather love clothes), and a faux fur bucket hat, since it was bitterly cold that day, and that hat is cuuuute. Anyway.

Endocrinology was great. The resident seemed like a nice fellow (sorry, medical joke), and the endocrinologist was excellent. They answered all my questions and got me going. Labs at the next building over confirm the testosterone in my blood (can’t wait to see the next numbers I post!). Okay, the Indian woman at the front desk, with whom I didn’t even have to communicate, really, since I got whisked back to a check in desk, was staring. I wondered if it was possibly because she hadn’t seen an Indian American trans woman, but she didn’t say anything, and she apparently stared at a trans man who came in later, and possibly also at my girlfriend (neither of whom are Indian Americans). Whatever, kind of odd, considering that a significant number of trans people come to see the doctor, and we rather pay her salary. But okay. I can tolerate staring, and I’ll be ready for her when I go back. In grad school, long before I took transition seriously, I got accused of working a room like a sorority girl, and forget you, if you think I make a timid woman. 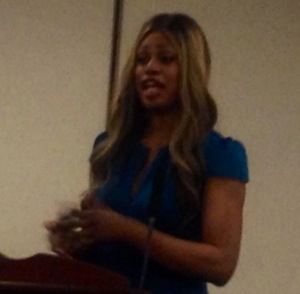 If you haven’t met her, Laverne is radiant. Seriously.
And when anyone preaches bell hooks, I listen.

Anyway, this was a Monday, and I took the day off to drive across the state to the appointment. Tuesday I went into work, and GVSU was hosting Ms. Cox that night – it had been on my calendar for weeks. No time to go home and change (and the place was packed; I wouldn’t have had a seat if I had). A trans woman friend yelled, “Hey, Mira!” across the room, and I had a momentary panic, but the moment passed. I had been able to stop at the pharmacy on the way there, so I brought in my pills (in a baggie with cookies from Subway!), and I got to dose next to a fellow trans person, also taking their evening dose, and surrounded by tons of my own queer friends and literally hundreds of people out to embrace and support our sister Laverne.

And, damn, did that lecture not sound like sweetest symphony on estradiol? And, as she quoted Sojourner Truth, “Ain’t I a woman?” Nice way to start a chapter in my story.