If you know trans women, especially politically active ones, you know that most of us hate the way our coming out is portrayed in the media. A friend recently was approached by a local reporter, who misled her into thinking she would do a piece capturing her humanity and professionalism as a trans woman, and then it turned out she was looking for something with pictures of her putting makeup on, a wall of wigs (my friend doesn’t even wear wigs, nor does she need to), before and after shots, and other totally objectifying representations. At this end of the narrative spectrum are these people who love transition stories lurid. The bigger the change, the better, ideally so that no one would ever believe the pre-transition person was them (in contrast, I too, wear my own hair, more or less within the range of neutrois to feminine styles I have for years, and I’m pretty instantly recognizable in makeup as me, although I might look a little younger and, I hope, prettier). I respect all my sisters, and I know they are survivors and that everyone makes hard choices, but I was really disappointed, for instance, in the coverage of Karen Adel Scot that, among other things, depicted her shaving her face (I’ll let you Google for that one) — we really need to support each other in saying this isnot okay media behavior and that we will not let ourselves be subjected to these kind of gratuitous expectations. 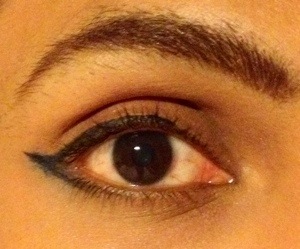 Okay, so you have no idea how accomplished
I felt when I made cat eye even this good,
but no photos of me doing my makeup until
they’re in a fashion magazine where women
are asked for their beauty tips. Which is
happening two-thousand-and-never. And also
can we talk about certain women who wear
cat eye way too often? Or would that be too,
well, catty? And can I also sneak “objectifeye”
into this obnoxious caption?

On the other end of the spectrum, I will admit, there are some trans people who choose transition, but their definition of transition is to declare themselves female (for some reason, I see this more with trans women than trans men, although I’ve had the luxury to get to know some great trans guys, too), and that’s the end of the story. They dress, talk, act in a way that’s only marginally distinguishable from the range of what men do and appear as. Except they want a female name and pronouns and bathrooms and so on. This, to be honest, is kind of a mystery to me, also. I might choose to accept them as female, but I don’t, if I’m honest, read them as female. And I guess I do sort of understand why someone might have pause wanting to share a bathroom with them. I have never really gotten a clear understanding of this, because the people I know who do this don’t really share their narrative, if they even perceive themselves as having one. They seem to see that as superfluous. Some of them even go so far as to view with disdain attempts to fit in (which some regrettably call “passing”), whether by wearing makeup, adjusting dress, etc., not just in themselves but also in others.

Many people have written how this kind of calculus applies particularly to women of all kinds (including trans women) — femininity, in a patriarchical world, is viewed as less authentic than masculinity and as something people “put on” instead of “are.” But I think this is where my “no transition necessary” sisters are being more than a little ridiculous. The truth is that men do put on kinds of masculinity, and women put on femininity, all the time – not just trans men and women but our cisters and brothers too. For me, being a man always felt like drag. I didn’t choose exaggerated butch masculinity as my drag. I had fun with it. I wore a lot of pink neckties. But wearing a suit and tie is “putting on masculinity” just the same as wearing eyeliner or heels is putting on femininity. It’s just not perceived that way. More particularly, it’s putting on professional workplace femininity. Granted that exists over a range, but all the cis women I’m close to (and I’ve had a lot more cis woman close friends than cis/trans anything else) make active decisions about what kind of femininity they put on, to look professional but feminine, to look cute but not slutty, to be stylish but not slavishly fashionable. It’s just judged in a more salacious way when trans women do it (and much like our cisters do this stuff… some of the worse comes from our own). 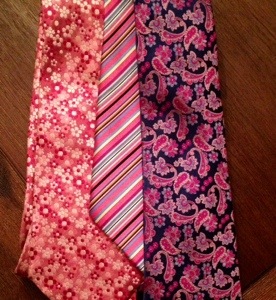 So these are too cute to give away, unless someone
really appreciated them, but I’m not really sure what to
do with them, mmm-kay? I kind of have to channel
my inner xoJane to say things like mmm-kay, incidentally.

Now without getting into the whole issue of how women should not be raped, insulted, demeaned, etc, because of how feminine they choose to be, my point is that the standard that I not “put on femininity” is absurd. The reality is that I’m doing precisely what I did when I was pretending to be a “man,” except it’s far more honest. Now, I am still making choices. The girl inside says, “Hon, you’re too old for that.” Or there are lots of things that just don’t fit my body type at the moment the way I’d want to. Those problems are magnified for a trans woman who’s transitioning in adulthood and just went on hormones a month ago. So I don’t wear things I want to. Or I do wear things that aren’t my first choice, but I accept that they work on me. Is it restricted, and is it stylized to make it easier for people to consistently gender me as female and to let me feel pretty without being tacky? Well, yes, but how is that any less authentic than when, as a “man,” I said, “Okay, if I wear that, I will go way over the edge of acceptable male behavior and there will probably be a scene.” I know some trans women were way better at being men than me (like that should receive an award…) but seriously, I suck at it and that’s what it was/is like for me.

So to all my sisters who are far more gender revolutionary than me, who declare, Modo Femina*, and suddenly are women, congratulations, you’re way more of a gender revolutionary than I am. And to my sisters whose transition is like some David Copperfield act to which I’m not even good enough to be your scantily-clad-assistant-in-obnoxiously-high-heels, brava. Now just let me get on with being a middle aged woman. It’s rather delightful to me, and I’ve never wanted anything more.

* Okay, Latin was not the language I studied, and so I don’t know whether Ecce Femina, which seems much more Thus Spoke Sarah Schuster, is grammatically correct, but apparently Ovid used this, so it’s got major street cred.

One thought on “Keeping Appearances”